CHECK IF FTTB IS AVAILABLE AT YOUR PLACE

Fibre to the Building - FTTB Plans

The Critical Information Summary sets out the important information about the service you selected.

Are you an existing TPG customer?

Let Us Call You

Fill in your details and we will contact you with TPG Fibre To The Building offer.

Thank you for submitting your details. We will be in touch shortly.

Unfortunately an error has occurred when processing your request. Please try again in a few minutes.
If you continue to experience the same problem, please contact TPG on 1300 403 211 for further assistance.

Get 50% off SIM plan fees for the first 6 months. New mobile customers only. T&C apply. Find out more

*Get up to $10/mth off select mobile plans if you’re an active TPG FTTB customer^.

^Excludes 12GB plan. If the associated TPG broadband broadband service is cancelled or becomes inactive (for any other reason), then the standard mobile monthly charge will apply.

M.M. of Zetland, NSW “I would liken this transition to driving an old car and then suddenly being given a brand new Ferrari. Thanks again for making this happen.”

User on Whirlpool forum “Is it just me or does this seem like the best internet service in Australia? I've been on it for a year now, full 100/40, no dropouts, no congestion, no speed issues, no outages…I can stream 4k Netflix easy, have the missus on YouTube while I'm gaming with no interruption and download as much as I want all for $69.99. Plus I was setup in less than one business day. Feels like we've won the broadband lottery guys!”

You need at least 25Mbps to watch 4K content on Netflix and YouTube. With our FTTB product, you can stream 4k on multiple devices without suffering the buffer!

Get FTTB on our no lock-in contract or enjoy free setup on an 18 month contract, both come with Wi-Fi modem included. Whether you are a renter or home owner, we've got you covered.

TPG owns and operates the end to end Fibre network infrastructure to deliver our FTTB service which means we have full control over your service quality.

Packed with the latest Wi-Fi 6 technology for great in-home Wi-Fi.

A phone service is included in all our FTTB bundles. If you want to make calls, you can Pay as You Go or choose from national and international call options.

Important things you need to know 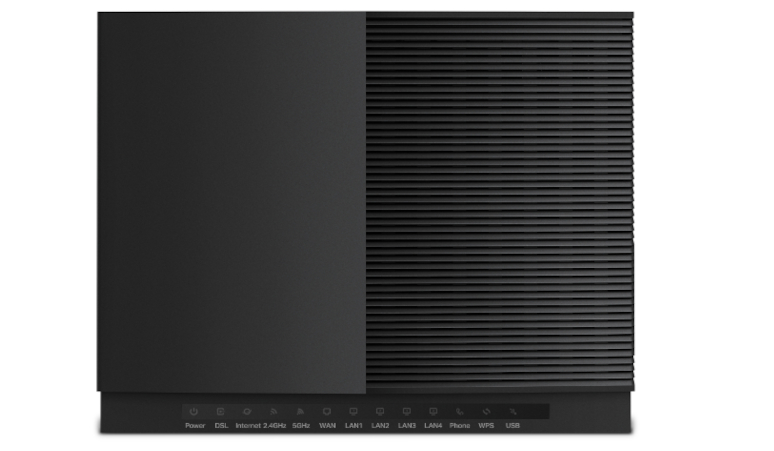 Makes and models of modems supplied are subject to availability.

Delivery fee of $10 applies unless equipment is collected from TPG’s Head Office.

Where you purchase equipment from TPG as a consumer within the meaning of the Competition and Consumer Act, 2010, that Act creates certain warranties which will apply in respect of the equipment.

TPG's range of services and features help you make the most out of your TPG Voice Service.

Call Barring allows you to restrict certain call types that can be dialed from your TPG Voice Service. You can choose to bar the following call types through the TPG Voice Service Control Panel Tool within Your Account:: Please note Call Forwarding features will not work if you have barred outgoing national long distance calls.

This feature is ready to use and doesn't require activation. Log into Your Account to configure Call Barring through the TPG Voice Service Control Panel Tool:

With Number Display/Number Block, you can select whether you would like your phone number displayed or blocked when calling other parties.

This feature is ready to use and doesn't require activation. Log into Your Account to configure Number Display/Number Block through the TPG Voice Service Control Panel Tool:

Call Waiting notifies you if someone is calling on your TPG Voice Service while you are already on a call. You can place the first call on hold to answer the second incoming call, and switch back again. To use this feature your phone will need to have either the 'recall' or 'flash' button.

This feature is ready to use and doesn't require activation.

Call Forwarding allows you to divert calls from your TPG Voice Service number to a different number.
You have the options to forward the following call types: Please note 'Divert if no reply' will not work if you have chosen to divert all incoming calls. Call forwarding to international numbers is not supported.

This feature is ready to use and doesn't require activation. Log into Your Account to set up Call Forwarding through the TPG Voice Service Control Panel Tool:

Caller ID allows you to see the phone number of the person calling you on your TPG Voice Service. This feature is only applicable on the phones that supports Caller ID. Please note not every number will show up, unlisted numbers, numbers blocked by the caller, international calls or calls from some areas within Australia will appear as PRIVATE or UNAVAILABLE.

This feature is ready to use and doesn't require activation.

Important Things you need to know

About your FTTB Home Bundle

Only available in selected buildings. Please check availability in your area. Further availability checks will be conducted upon registration.

Above monthly charge and setup pricing is based on customers agreeing to waive the Customer Service Guarantee (CSG). For more information please contact TPG Sales on 13 14 23.

TPG will supply every customer with a Wi-Fi Modem to get connected with TPG’s FTTB service. Depending on your building, TPG may also supply a Network Termination Unit (NTU). Customers are required to pay a $10 standard delivery fee or they can collect the necessary equipment from TPG’s head office in North Ryde NSW.

Prior to the installation appointment, TPG’s customer is expected to:

On the date of the installation, a TPG technician will arrive at the Main Distribution Frame in the customer’s building and connect the copper pair cable from the customer’s side (MDF “B”) to FTTB equipment (MDF “A”). TPG’s technician will make sure the supplied equipment between customer’s premises and FTTB head end equipment is connected correctly before the service can be marked as active. TPG’s responsibility and demarcation point is the Main Distribution Frame (MDF). TPG is not responsible for the in-building cabling.

Once the FTTB service has been activated, if you currently have any existing services like phone or internet at your premises, you will need to contact your current provider to have these services cancelled to ensure you do not receive any further bills. TPG recommends you check with your current phone and/or internet service provider regarding contractual commitments and termination/disconnection fees associated with your current services. TPG is not responsible for these charges. If you are also porting your existing phone number to TPG, do not cancel your phone service until the number has been ported.

At registration time, you can choose to port your existing number to TPG or have TPG supply a Direct Inward Dial Number (DID) for use with the Voice service. This number will be allocated to you based on the address which you provide us at the time of registration.

TPG will make use of your number as a reference point to charge for local calls. TPG will use its best endeavours to supply the Integrated Public Number Database (IPND) with your address details for the purpose of emergency services (000) calling.

Charges for calls are not included in the FTTB S Bundle and will be charged listed TPG rates on a 'pay as you go' basis and deducted from your Prepayment. Calls to 19/1900 numbers are not supported.

Charges for calls are not included in the FTTB M Bundle and will be charged listed TPG rates on a 'pay as you go' basis and deducted from your Prepayment. Calls to 19/1900 numbers are not supported.

All TPG services are prepaid. You must pay the monthly recurring charges in advance. In addition, you must make a prepayment for usage that is not within the included value (if any) for the plan that you have acquired. Your initial prepayment will be $20. After registration, you may nominate how much you wish to prepay but the minimum prepayment is $20. The prepayment will be debited from your nominated bank account or credit card. By acquiring and continuing to use the service, you agree to an automatic top up of your prepayment. The top up will occur when the amount of prepayment falls to below $10.When that happens, TPG will debit a sufficient amount from your bank account/credit card to restore your nominated prepayment amount. If your usage is high, this can occur more than once per month. You authorise TPG to make such debits to your account/credit card. If you do not exceed the Included Value and do not incur any charges that are excluded from your plan, there will be no automatic top-ups. We will send you messages about your usage and the debits during the month. Your service will become inactive if our attempts to debit credit card/bank account to top up your prepayment are unsuccessful. If you do not use the prepayment, it will be forfeited to us when you cancel the service. You agree that no bill will be provided for this service and that direct debiting of your account or charge to your credit card may occur notwithstanding that no bill is provided and that it may occur even though you may not have had the opportunity to check charges at least 10 working days before the debit.

You can port (transfer) your phone number from Telstra, Optus, AAPT, Primus or Powertel to TPG. We may not be able to port your number in all circumstances, including where you fail to provide correct account details, or as a result of contractual obligations with your existing provider. If you are porting your number to TPG, inbound calling to your number will not commence until porting is complete which will take a further 1 to 5 business days.

A 4 Port Wi-Fi Modem Router is included in FTTB Bundle plans. $10 Delivery fee applies if equipment is not collected from TPG's Head Office.

^ The early termination charge is 50% of the monthly charges that would have been paid between the date of cancellation and the end of the contract period, up to a maximum of $350.

The above fee applies if you give TPG less than 3 working days notice of any change in installation appointment prior to the scheduled appointment communicated by TPG to you.

On the date of the installation, a TPG technician will arrive at the Main Distribution Frame in the customer's building and connect the copper pair cable from the customer's side (MDF "B") to TPG's equipment (MDF "A"). TPG's technician will make sure the supplied equipment between customer's premises and TPG's head end equipment is connected correctly before the service can be marked as active. TPG's responsibility and demarcation point is the Main Distribution Frame (MDF). TPG is not responsible for the in-building cabling. 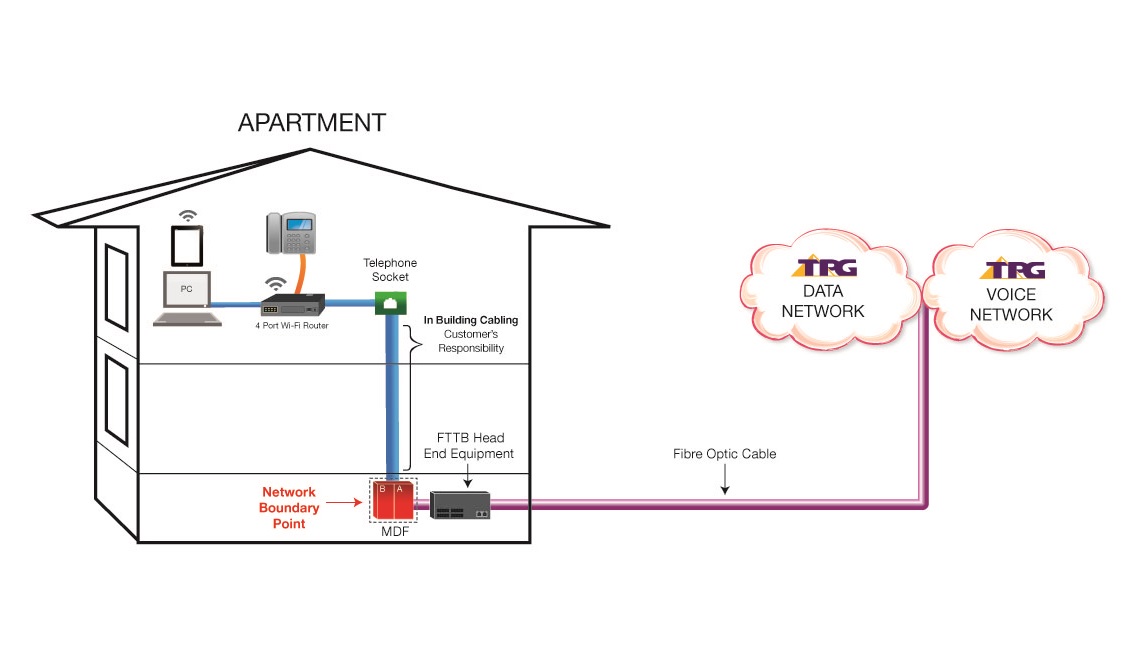